I have started to plan the my new online books catalog as part of the new site structure, as I discussed here. I know the basic shape of the way the catalog will work, in that I will be using server based technology rather than compiling an Access database to HTML. I have been assessing which database technology to use bearing in mind that part of the reason this site exists is to provide an opportunity to learn new techniques and I wanted to use either Entity framework or NHibernate as a repository model of the data.

In normal circumstances I would probably select MySQL as it does everything that is needed is supported by the tools that I plan to use. however there are other requirements to be considered.

So on balance for this site I am tempted to select SQLite however I am concerned about the lack of support for foreign key constraints. I like my data integrity enforced and would be worried if it was not.

Foreign key constraints are used within the database to ensure that the data is stored correctly. For example consider this relationship from the books database. 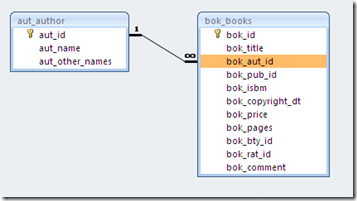 All this relationship does is ensure that each book has a valid author, and that authors cannot be deletes if it would invalidate any books. In most applications data is accessed and updated in a multiuser environment. The integrity of the data can only be assured if the constraint is applied in a transaction. Consider what would happen if one user changed a book to reference author A and at the same time another user deleted author A. A typical approach is to use foreign key constraints in the database like this

Although the same result could be achieved using other techniques doing it like this in the database is the most robust and transparent solution.

At first I could not believe such a fundamental part of SQL was missing from SQLite. I had a look around and found this posting describing the problem and a solution using triggers. It looked good and when I tried it with my database it worked. It did however make the SQL to create the constraint in the database a bit lot more verbose. 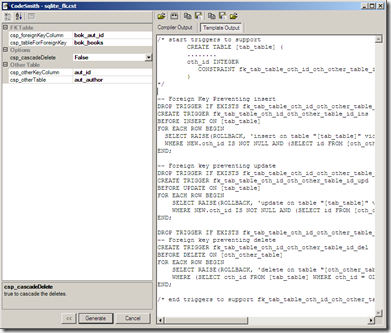 I have used Codesmith 2.6 – the last free version to test this template in case you do not own a later version however it should work in later versions. I have also added a template parameter to cascade the delete.

You can download the template if you want to use it.