After Scott going on about how good Windows Home Server (WHS) is I decided to try it. I have to say on the whole I am very pleased, it works very well.

I did have one issue with restoring machine images. WHS will backup machines on the network. You can restore individual files by opening a backup set and copying any files you need. If you loose the whole machine, for example you suffer a disk malfunction you can restore a machine image.

Hurrah it works test over. Well not quite. This has happened before, and undoubtedly will happen again, but would you believe it this was the only machine on the network that it worked on, The next two machines I really needed to restore failed, I had managed to test the only machine that would work. The machines I was trying to restore to were Acer Aspire One A150 and D250, given how popular these machines are it was surprisingly difficult to find a solution.

The process of restoring a machine image is

However as I found out there can be problems where the wired LAN driver is not found at step 4 or does not work at step 5 in the sense that it fails to find the home server no matter how much cajoling. It seemed to me that to get the restore to work I was going to have to manually insert the drivers.

There are some things to be remembered 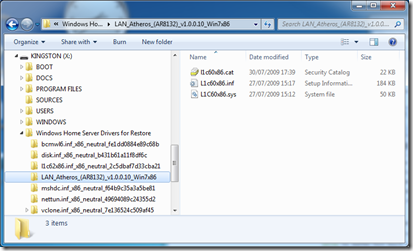 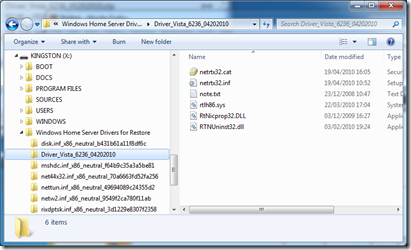 I found it handy that I could name the folders with the proper name as then I give them meaningful names, and keep these drivers safe in case I need them in future.