Recently I needed to refactor some code that had an impact on a database, in common with the DRY techniques I wanted to remove duplicated calculations. I’ve simplified this example to make it easier to read.

Data needs to be returned from a SQL Server database to the web site DAL, the code in the DAL used ExecuteScalar to get results back from the stored procedure. We need to calculate the profit for a given product and net price combination as well as being able to calculate the total cost 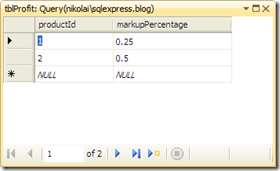 When run in Visual Studio it looks like this

All is good, to implement the total cost we could implement the profit logic again and add back on the net price however we want to eliminate the duplicated logic. At first glance this looks easy we could write a procedure like this

However if you look carefully in the output from calling the procedure the first returned value is the profit, then the total cost is returned and its the first value that gets returned into the DAL.

when called produces the correct result

Note that only the total price is returned.