I’ve been taking a break from PodcastUtilities to start work on a new project TextByNumbers. TextByNumbers is designed to enable people putting together letters / emails / SMS messages from snippets that the user can easily produce. Its should be useable on phones with or without a data connection.

I did think of writing a native app, I guess it would be an android app as I have an adroid phone but then I thought that I could do something cross platform if I used HTML5. I selected JQuery Mobile and Knockoutjs for my architecture. So I have come up with the first cut version of the app. The basic functionality has been done and the app does work and has a couple of users already 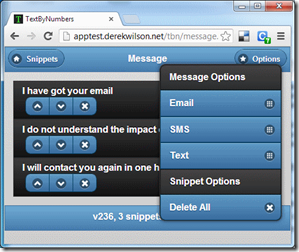 In general the platform was pretty much what I was expecting its still an immature architecture by comparison to .NET development or even native development however I think that the results are completely acceptable (I’ll will await user feedback) and I can see that for some scenarios that the significantly lower cost against native development will be compelling. As it stands at the moment I think that a native app will deliver a more polished solution, but will require multiple implementations across the market place (iOS, Android, Windows Phone etc).