This is the third place I have lived in as many years. Given that the commuter trip is one that I make twice every working day I was interested in how long it would take. We have moved out to the beach, about 20 KM north of Wellington. Its beautiful and tranquil and I hoped that I would be able to keep roughly the same commute time by another new gadget, a folding bike. 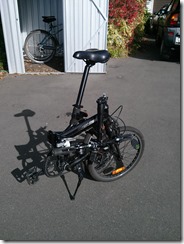 The trains to Wellington will only allow a bike on board if it folds. Its a 20 minute walk at each end of the train trip so I was hoping that I could save some time at both end by taking my bike with me.

It turns out that I can, I could make the trip 20 minutes faster using my bike.

On the way to work I did something slightly different. I would cycle down alongside the railway line a couple of stations, its was a pretty cycle and it meant that I got some exercise in the morning, carrying my bike with me meant I did not have to get on and off the train at the same point.

I would probably not choose a folding bike over a conventional bike, it is a bit harder work to cycle and has no suspension but for commuting they are brilliant, on the way to work I cycle about 8KM on the road and its perfectly fine for that kind of distance..