Last year I produced my first native android application. its called measureme and its done ok on googleplay, over 100 downloads and a review of over 4 stars.

it was developed using eclipse and ant, these were the recommended tools at the time and i used them to build release and debug variants and to run unit tests. towards the end of the year android studio 1.0 was officially released and around the same time android 5.0 was released, this prompted me to migrate to the new development toolset of androidstudio and gradle.

when i fired up androidstudio it would import my eclipse project and that did get me 80% of the way to being migrated but as always the remaining 20% needed some fiddling.

it took some time to work out how to make the application work slightly differently when build for release and debug builds using custom Ant tasks. In android studio the same effect is much easier, in the Gradle script for the app I set the sourceSets like this

Then I created this folder structure 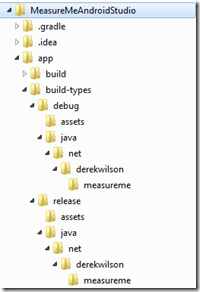 In AndroidStudio the files in the project treeview are changed depending upon the build variant selected, debug in this case 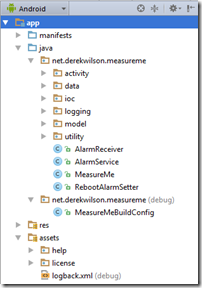 Signing and copying the app had been complex and once again I had used a combination of Ant and shell scripts. It was just as complex using Gradle. This is because I needed to enter a password to sign the release apk but I did not want to put the password into the Gradle script as this is an open source project.

It turns out that I can use the Console when I build from the command line but I needed a slightly different mechanism from within AndroidStudio. I made some slight modifications and ended up with this Gradle script.

The migration did not take that long and I have found AndroidStudio to be great improvement over Eclipse.