i have previously written about using dagger2 in my new project recommender. one of the things i found most frustrating about writing native android code in contrast to c# or javascript code is how hard it has been in the past to get a reasonable amount of test coverage from unit tests.

there have been challenges

While things have been getting better I still needed to settle on a framework for code isolation to give me a codebase structure that would lend itself to extensive unit testing. I did look at Mortar however I found it to be a little “all or nothing” meaning that retrofitting it to an existing codebase in an incremental manner was not going to be possible so I decided to look at as many examples as I could and to partition the code using my own lightweight framework. I have tried to reference all the articles I have read but if I have missed any then I apologise, this code is very much a distillation of may other peoples hard work.

The first think needed are scoped IoC containers. There are some objects that we need only one of and we need them across the whole application, there are however other objects that we want a separate instance for each activity and we want them to go away when the activity goes away. 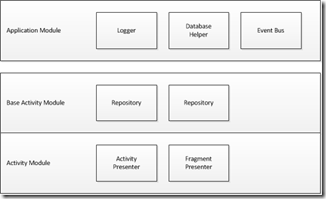 Dagger2 modules are the IoC containers I will be using. The application module contains global singletons that are used throughout the app, for example loggers. If activities are sufficiently simple they might only use an application module and they might not have their own activity module.

The Dagger2 code for an application module looks like this.

Whenever Dagger supplies a dependency it will also supply all of its dependencies as so on. For example if the RxEventBus needs an ILoggerFactory Dagger will provide one, as long as the RxEventBus constructor is marked as @Inject. This process is automatic within the module however if any further derived modules, for example an activity module needs access to a ILoggerFactory then we need to make that available in the component interface.

The EditRecommendationModule is just one of the modules used the application, other activities have their own module, however they all inherit from the base activity module as they all need access to common things, however as we said above they get their own instance of anything marked @ActivityScope, only the objects marked @Singleton are shared across the application. The inheritance is to avoid having to type out the declarations in the BaseActivityModule in each presenter module.

The BaseActivityComponent needs to declare any objects that are needed by the presenter in its component interface just like the ApplicationComponent. The PresenterComponent also exposes the two presenters, this is so that we can access them from the unit tests.

It might seem odd to have to declare inject() methods in the components for all the classes that can inject using the component. In other IoC frameworks this is not needed however Dagger2 is entirely done at compile time, there is no runtime reflection, and so we need to explicitly indicate to Dagger2 at compile time which classes inject which component so that the correct code can be generated.

The presenter pattern I settled on is very simple and lightweight. It also means that more typical activities where UI and business logic and data access code is all mixed up can coexist with more formally laid out Model View Presenter activities.

An activity that is complex would have this arrangement

A simple activity that predominately contained UI could have a simpler structure, it can just access application global objects and not use a presenter at all. Simple activities can contain simple or complex fragments like this.

To try and encourage uniformity in the pattern the presenters and view interfaces have common bases like this.

The presenter lifecycle is that we call bindView as soon as the presnter is created and unbindView when the activity or fragment is going away, create and destroy enable the presenter to populate the view and release any resources or subscriptions.

It seemed like a reasonable presumption that all views (activities or fragments) would be able to end and show messages and errors.

Android creates the activity classes for the application as a result of Intents declared in the manifest. To get everything setup the activity needs to get its component and then use it to inject itself which will create the presenter and all its dependencies.

Its a bit unfortunate that this code needs to be present in each activity, its not possible at the moment to use Dagger2 to inject in the base class, though perhaps this will change in future.

The call to inject() will initialise the ILoggerFactory as well as the presenter, this is because we want the activity to be able to emit logging without having to go through the presenter.

In this example the activity is quite simple, as many Android applications much of the work is delegated to a fragment.

The fragment is created in the activity like this

The lifecycle code of a fragment is similar to that of an activity.

The fragment also implements is own specific interface so that the presenter can manipulate the UI.

The lifecycle of the presenter is similar to that of the activity presenter.

The intention is that the view implementation should only deal with the UI and should not contain any business logic. We do not intent to write tests against the view logic.

If you want to see the complete source code, or grab the code and step through it then head over to bitbucket.