Towards the end of last year I started working on a new project, Recommender. I found it interesting to compare the tools i selected in 2015 as against an earlier project such as measureme. when i started the new project with new tools i also wanted to try apply some structure to the code to help enable testing.

When projects are developed and tested and run all in the same environment then producing automated test suites are easier. For example I have worked on web apps that are built and tested in Visual Studio running on Windows and then the automated suite is run by TeamCity also and Windows and finally the app is deployed to IIS and Windows. Android apps are different, the target app must run on a handset of some description and apps are never developed on a handset. Many approaches to testing, such as Espresso and Calabash test the app on a handset or emulator, I have never found these to be particularly reliable or fast. An android project I worked on has around 100 Espresso tests and they only managed to run to completion less than 50% of the time, so for over 50% of the time I don't know if the build is broken or passing its tests. I think that there are simply too many moving parts and the toolset is to immature to enable reliable testing on a device or emulator.

Units tests on the desktop

To test in Recommender I decided that the tests would be run in the development/build environment using JUnit. JUnit is well established and reliable and running on the development environment meant that the tests could quickly be run by the developer before checking code in and also on the build server to ensure that the build was not broken. Testing like this does require some careful structuring of the code. I wanted to test the business logic and the building blocks of the model, which was fine, however testing in JUnit on the desktop means that I cannot access any Android OS API’s, so testing UI specific code was not going to be possible unless some kind of emulator was used.

The two main pieces that help with structuring the code were MVP and Dagger2. Using an MVP pattern enables me to separate out the UI code from the business logic.

Typically the Activity contains all the UI code, which is kept deliberately simple expressions of intent. The Presenter contains all the business logic. The Presenter and all of its dependencies are injected by using Dagger2. This means that the business logic in the Presenter is separated from  the Android UI by the Activity and also from the nuts and bolts of the Android OS, such as HTTP transport and SQLite by Dagger2 injecting its dependencies.

As I’ve already covered Recommender uses scoped Dagger2 containers to inject the dependencies of the Presenters.  The Application Module contains all the singleton stateless objects such as loggers, then there are activity modules that contains objects that have state and that a separate one is required for each activity. The Activity Module is spit into a Base and a derived as the Base on contains objects that can be used by multiple Presenters. 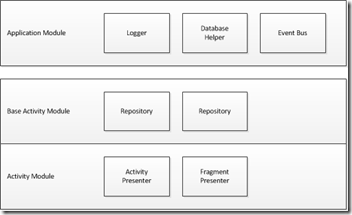 The tests have a different application module which looks like this

The mocks isolate the business logic under test from the Android OS. For example the SQLiteOpenHelper and the ILoggerFactory are pure mocks, the IEventBus can be optionally a real instance or a mock. The mocking framework I use is Mockito, it is stable and very flexible and a great partner for JUnit.

The same pattern is repeated for the BaseActivityModule, however I do not repeat the pattern again for the final layer as the only thing the activity module contains is the activity or fragment presenter and that is the object I want to test so I can use the real module from the application.

As the TestAndroidAppliaction extends the main AndoirdApplication it can be used where we would usually use the real application.

Putting it all together

So to test an individual call in a presenter I use this pattern.

The @RunWIth and @Config direct Roboelectric how to launch the test application.

This test checks that when the presenter method updateSearchFilter is called it will in turn call applyFilter on the view with the correctly formatted parameters. The FilterCollection parameter should contain the search string. To verify this happens I create a mockView, which is a mock that has the same signature that the Activity UI exposes. I can then use Mockito’s ArgumentCaptor to inspect the parameters that were passed to the view.

The SetupPresenter method is supplied by the base class like so

Yes. I have used this mechanism on a number of projects and the test are fast and reliable, very well suited to a developer machine and a build server. As an example one project has 250 tests that run in 13 seconds and have run multiple times per day for months without a single failed run. That isn't to say that the build has never broken rather it is to say that the status of the build is never in doubt.

If you want to see the complete source code then its available in Bitbucket.