I bought myself a Pebble watch at Christmas and even wrote an app, wrist-spin, to display live cricket scores on the watch. Its a great device and its been fun to develop for, however the setup is not straightforward.

The Pebble SDK only runs on Mac OSX and Linux. Now given that 90% of desktop machines run Windows and that the life blood of a device like Pebble depends on the availability of a lot of high quality app this decision seems to border on lunacy, but that's the place we are in.

So if you are one of the 90% that run Windows what is the easiest way to get started writing apps for the Pebble. A virtual machine is the most obvious solution, which rules out Apple products.

First select your virtual host, I have used VirtualBox for years and like it so I started with it. Next I decided that I would use the latest LTS (Long Term Support) version of Ubuntu from the downloads page, in my case this was 14.04. I wanted a newish stable version.

There are any number of guides on how to install Ubuntu in VirtualBox, I made it a dynamic disk and by the time I has finished it was 16GB. There are a few gotchas  by default the VirtualBox 3D acceleration is off and Ubuntu will run very slowly until you turn it on. Even when it is turned on you will sometimes see console errors however some of the errors are expected which does make this whole area confusing the best quote I found was in this article

General note to everyone commenting on this ticket. If 3D is working in your guest then the output of "glxinfo" should include:

The following warnings will always appear, even when 3D is working, due to a problem in the way our driver is implemented which is not simple to fix:

The Pebble SDK now comes in two parts, isn't that great. Actually it is a good idea to help you switch between SDK’s easily once you are up and going however it does make it a bit more complex to get going.

First of all I installed the stand alone PebbleTool SDK and following the installation instructions for  Linux. I found that adding the “pebble” command to the .bash_profile in the instructions did not work and I ended up adding the following two lines to my .bashrc file

The installation is a little complex and needs to be done every time the PebbleTool is updated, including altering the .bashrc file so I tend to checkout the release log to see if there is enough in the release.

The PebbleTool command line can be used to build and deploy your app as well as download SDKs and switch between them. pebble sdk list will list all the SDKs you have downloaded as well as the available SDKs, you will need to download at least one to start work, probably the latest one by typing pebble sdk install

Before installing pretty much anything you are going to need Java I installed the OpenJDK 1.7 and its worked pretty well so far, I used the instructions from the Ubuntu site.

I needed some form of editor to work with code and I’d used Atom so I installed that. Its not completely straightforward however following these instructions got it installed.

Pretty soon I got frustrated with Atom and decided to switch to Visual Studio Code. Its much faster and much less likely to crash the installation is pretty straightforward.

One of the real bonuses with Visual Studio Code has been that I can add build and test tasks by following the instructions here I created this file in .vscode/tasks.json in my application folder

Now I can just press CTRL-SHIFT-B to build and it even remembers to save my files first (something I keep forgetting to do). and CTRL-SHIFT-T runs the build in the emulator.

Next you are going to need some form of GIT client, I used SmartGit, instructions are here.

There are any number of tutorials on building “hello world”. I found this article had some good tips for extra libraries you might need and this one had some good skeleton code.

In general I would edit the code. Then save everything. Then

in the root of the application. Then

If the code crashes then you are writing in C and there wasn’t a debugger, the emulator would just crash and you would get the sad face. If your app just crashes on your watch then make sure you have the latest SDK installed on your watch or at least the SDK you built with matches your watch. 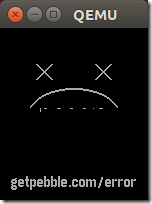 The later SDK release do seem to have some debugging support but I haven't tried it yet. In general I use a lot of logging like this

Its a bit primitive but I think that's part of the appeal of building apps for the pebble. The source for my first app is here.