I have previously written about how to get Windows Media Center working in New Zealand. Recently my Media Center PC died and I needed to rebuild it. In 2016 this was slightly more tricky than I expected.

I know that Media Center has been deprecated by Microsoft and that it is not supported on Windows 10 however for live TV there really isn't a real alternative. XBMC / Kodi keeps getting better and eventually I think I will use it but for the moment I will stick with Media Center, after all its still supported by Microsoft.

I had an old laptop with a broken screen that I was going to use as a TV. Looking on the internet is appears as though it is possible to get Media Center to work on Windows 10 however I think I wanted something more stable for a TV. So the first task was to install Windows 7. This was my first surprise it turns out that after a new installation of Windows 7 that Windows Update does not work to bring it up to date. it appears that I needed to patch the Windows Update Service and then it applied all the required updates.

Then the next surprise was that the most brilliant EPG Collector was not able to download the TV listings. It looks as though the MHEG5 listing from the DVB-S are not longer working and I needed to move to the OpenTV provider. So my EPGCollector.ini now looks like this

The next surprise was that the listings for TV One were not working I experimented with excluding the first TV One station from the station list and this seemed to work. 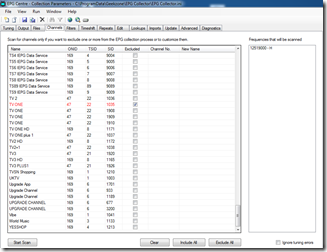 I guess there may be other solutions but this one worked for me.