In my spare time I have started to work on a Android project and its nearing the point where we can publish the first release. The project is an Android app that is entirely written in Kotlin.

The general drift is that unit tests are the cheapest and most cost effective method of testing but there are some things, such as UI testing that dont lend themselves to this approach.

The more I see of tests above the unit test layer in the triangle the more I question their value at all. I can see that by having UI tests then the cost and risk of missing something by manual testing is lowered however in practice, in my experience I have found the following problems

I do understand that UI tests can provide value, I just think that the value is small and the cost high. In general with limited resource I can think of better places to spend my resources. This spare time project has very limited resources so I though it would be interesting to see where we spend them.

Most of our tests are unit tests, and use JUnit and run on the standard desktop JVM. The setup is quite straighforward, the following dependencies are added to the build.gradle file

The run configuration in Android Studio looks like this 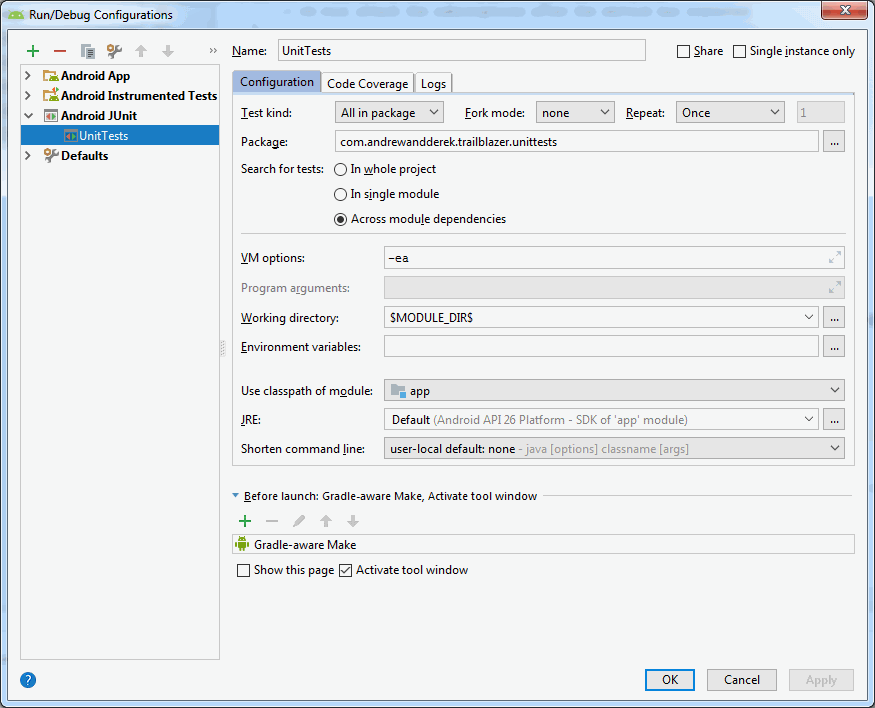 To be able to test a piece of code it needs to be isolated from any Android code, as Android does not exist on the desktop JVM. You can cheat a little by adding the following to your build.gradle.

However if you can structure your code I would recommend avoiding this. One example of how the project is structured is the use of IResourceProvider

Then in production code we can do this

and in the tests we can do this

There is some code that we cannot write unit tests for. This is usually because we want to test how we interact with implementations that only exist in Android. In our case we needed to test that we were able to use XmlSerializer, SQLite and SQL queries. We could have used something like Robolectric but in the end we elected to write tests that use the actual Android implementation on a device. This is because in the past Robolectric has proved to be less than easy to work with in terms of updates and also because we want to test the actual SQL results and the actual XML rendered. We try and keep these tests to a minimum as they are more fiddly to run but we have found the value in them to be worth it.

Its worth noting that the test we are writing here are to test business logic that we cannot test on the desktop JVM, we are not testing the UI.

To set them up we add these dependencies to the build.gradle

The run configuration in Android Studio looks like this 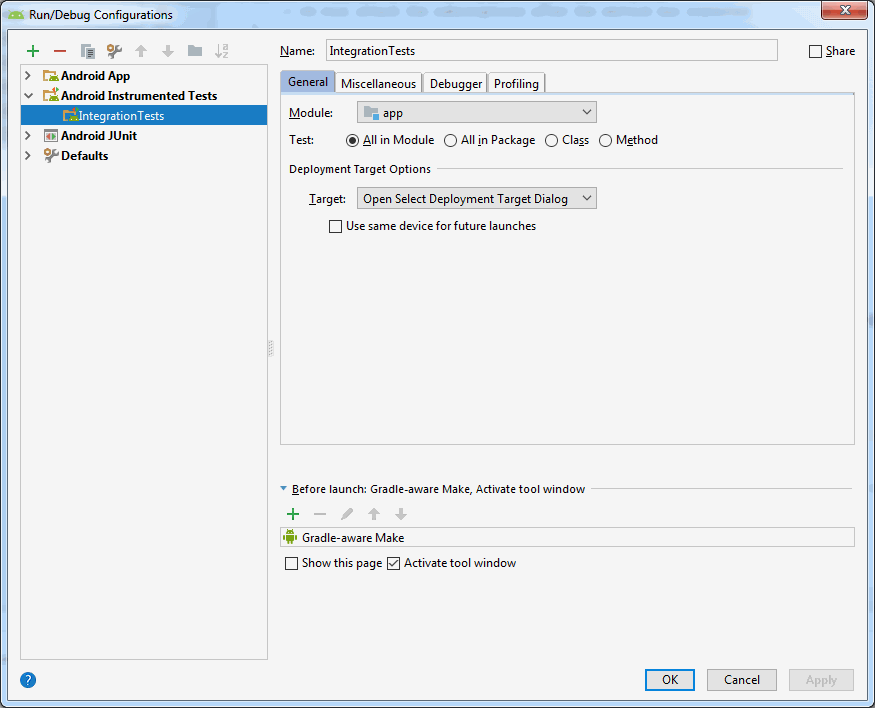 We derive our own TestApplication because there are some parts of the production application that we want to turn off.

For example we dont want to go through the performance of creating our default database schema for every test so we override that method and dont do anything.

The other form of testing that we do is smoke testing. This is a manual test script that we follow jusy prior to uploading the app the the store. The script goes something like this

The intention here is to hit the most mission critical parts of the app in a test that can be quickly run, it should take less than 5 minutes. The plan is for it to take less than 10 minutes, when we get to that length of time we should remove one step for every step we add. It indicates the flow though the app leaving the tester to check the fine detail or vary the route.

The balance of the tests

The project is not at its first release yet so the figures are not final, but as it stands we have around 40 integration tests and over 250 unit tests, I would envisage that the number of unit tests will increase dramatically but the integration tests not.