So it was always going to be non-trivial to setup my project to support both OS4 and OS5, even though there was a migration guide.

Getting build and run to work

The guides detailed a number of breaking changes and required changes to the project structure. As the Q&A section makes clear its not possible to target both OS4 and OS5 from the same project. I could have two separate projects and share some files between them but I’ve done this in the past found it to be a bat idea, it too easy to have an unfortunate effect on the “other” app. So I decided to copy the current app and have two completely separate folder structures Fitbit-os4 and Fitbit-os5

So first of all I target the correct devices and OS in the package.json

then npm install to get the required packages

The migration guide lists the system components that no longer exist, the only option is to remove these from the widgets file so my file went from this

there were some quite obvious and documented things that needed to go, the migration guide lists these components as being removed

However what is not documented is that tile_list_widget is also gone, and with wrist-list being a todo app this was a bit of a problem.

At this point at least the app could be built and would launch, though nothing was displayed on the screen. 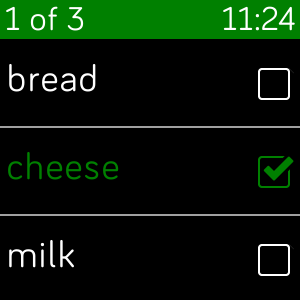 The SDK recommends adding these styles to the styles.css

with these text elements

I also replaced the textarea

I did find this posting that gave some information about checkboxes in OS5. However there is no documentation on how to use them so in the end I found that it was just easier to reimplement them myself.

I particularly liked the rect with the id of touch as a mechanism for adding a click event, which I found in the SDK guide for the tile list component.

The CSS is this

The only part I had to make a compromise on was the that in the original app I could have multiline checkboxes, in fact I blogged about it, in this implementation I only support single line with truncation. In fact that was one of the things that is different in OS5 that can trip you up, if you dont specify the height of the tile-item symbol (on line 8 of the SVG markup) then nothing is displayed.

As multiline is not supported it made the javascript less complex

And after all these changes it looks like this

The tick image is from the Fitbit SDK design assets.

I am still getting this error in the simulator

and sometimes this error

But as far as I can tell this is just the simulator being a bit flaky.